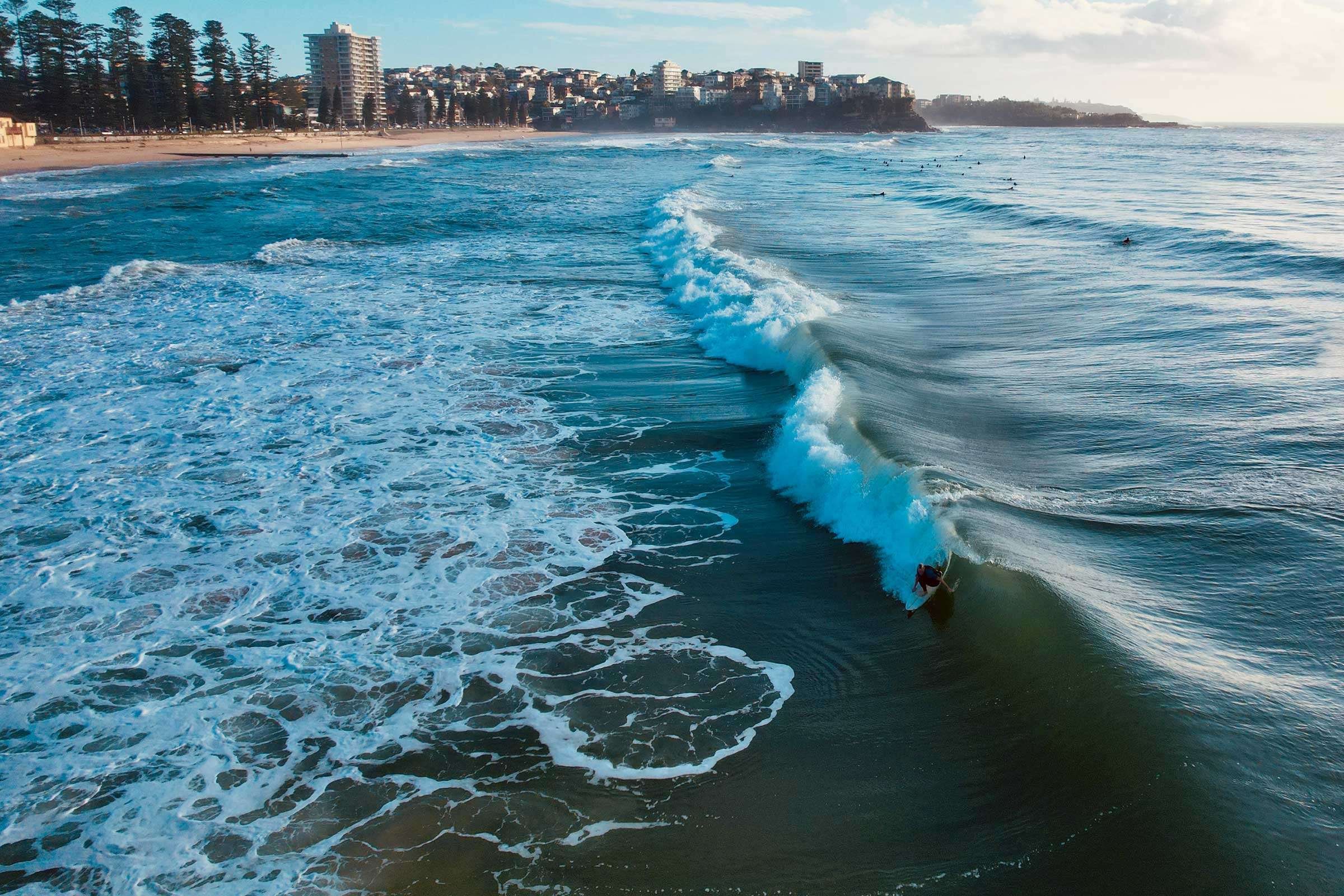 Manly is one of Sydney's best destinations for surfers of all levels with a variety of breaks along the 3km beach from Shelly Beach and South Steyne at the Southern end through to Queenscliff at the North end.
Updated: Oct 10 2022

Manly is one of Sydney's best destinations for surfers of all levels with a variety of breaks at the 3km beach from Shelly Beach and South Steyne at the Southern end through to Queenscliff at the North end. This stretch is where you will find most people surfing a variety of beach breaks. Level is dependent on swell size, direction and sand banks.

The Queenscliff end usually receives more of the Southerly swell and has bigger waves. There are usually good beach breaks here with spread out peaks. At the very Northern end, a left can form off the rocks with a fast steep takeoff into a somewhat short lived ride. On huge swells, you will see start to see the elusive Bombie about 1km out from Queenscliff.

Right in front of the North Steyne Surf Lifesaving Club there is usually a permanent rip and consistent beach breaks.

Most beginner surfers tend to stay around South Steyne area as the waves are usually smaller and they don’t tend to wander to far from the corso. In very big swells, right handers can form at the point in front of the South Steyne club house.

In the right conditions with a large swell, Fairy Bower is the wave at the tip of the headland. One of the best waves in Manly, the Bower is a quality right hander which peels for a long distance losing steam as it goes into the channel. Crowded when it’s working. Further out is Winkipop which requires a steep take off in front of the rock shelf and a fast hollow ride. Good surfers can connect the two waves if they don’t get dropped in on. Access is via semi long paddle from Shelley Beach or Halfway beach. When the swell is huge and Manly is closed out, the point break morphs into a steep barrelling ride of your life.

On the other side of the headland is Deadmans - Manly’s own big wave spot. In absolutely huge swells this board breaking monster starts to spew barrels daring the bravest of chargers from all over Sydney. A steep takeoff into a barrel with a sneaky ledge that threatens to pitch you into the chasm. Blow it and you might get dragged along the reef. Make the wave and earn the adulations of the crowd sitting up on the cliff face.

Travelling surfers will find Manly a good place to base yourself. There are lots of activities like snorkelling Cabbage Tree Bay, SUPing the harbour and the city is just a short scenic ferry ride away. From Manly, Freshwater Beach is a walkable distance and a bus service runs all the way to Palm Beach at the top most point of the Northern Beaches.

There are a couple of operators at Manly for group and one on one lessons catering to all skill levels.

Plenty of big name surf shops in the Corso as well as independent shops scattered around Manly.

Dripping Wet and Manly Surf located opposite the beach do rentals. In the Corso, the Rip Curl shop rents out boards by the hour. On summer weekends, there is a surfboard rental service operating on the beach at South Steyne.

Brookvale next to Manly was an epicenter of the East coast surfboard industry. Today, its a base for well known and respected shapers.

Things to do in Manly

Manly's corso is a hub of activity where you can find cafes, restaurants and surf shops and more. Pay a visit to the Hotel Steyne or 4 Pines for a pint or one of the many beachside restaurants for happy hour drinks. Manly's Harbour side and along the pier are lots of options for winding down the day. Along Marine parade, The Boathouse at Shelley beach and The Bower are local favourites. Good places for a pre / post surf coffee include Rollers who make damn fine croissants, Little Belgrave Cartel and Little Legends tucked away in Rialto lane.. In the Northern end Jellyfish and Kazzi Beach Greek behind the North Steyne club are good for a cuppa. For takeaways, the Manly Point Kiosk is a local favourite at the South Steyne surf lifesaving club. Little L is a takeaway joint known around Sydney beaches for their grilled chicken burgers within stumbling distance to the beach.

Check out our Manly Beach Guide.

Bus Terminal at the Manly Jetty

There is paid parking all along the beach and free 2 hour parking at the local council car park, everywhere else is ticketed.