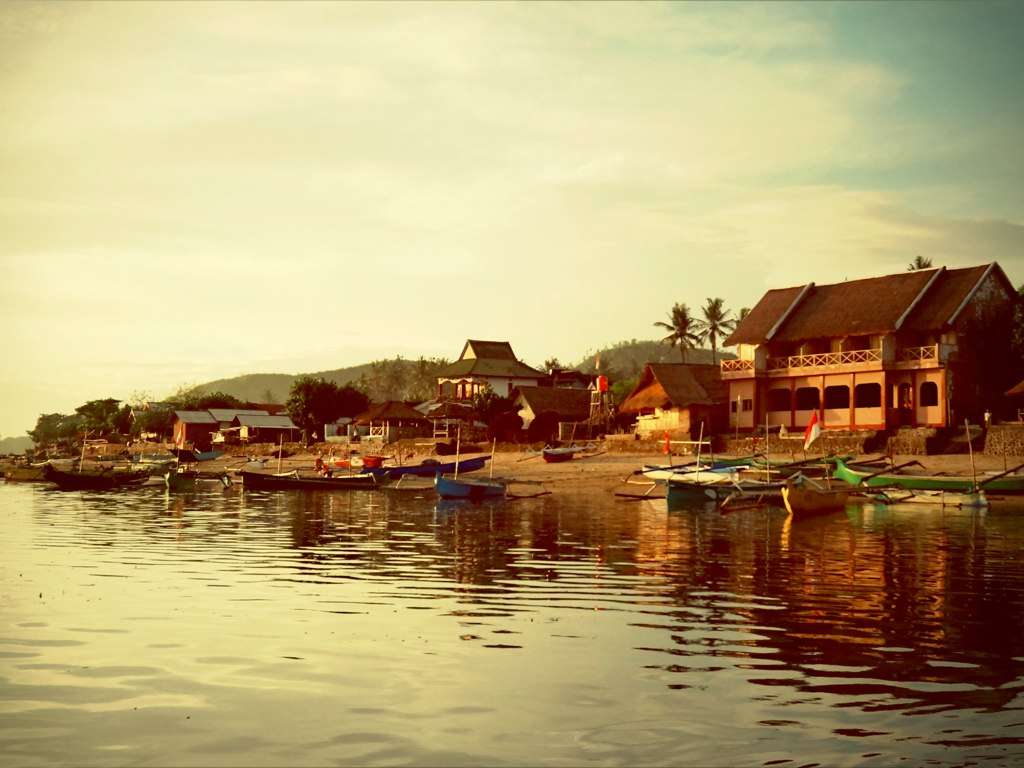 Inside Gerupuk Bay there are a number of breaks which work on varying tides and swell directions suitable for surfers of all levels.
Updated: Oct 10 2022

Gerupuk Bay is located on Lombok’s Southern coastline about a half hour ride from Kuta. There is a choice of 5 surf spots here which work on different tides and swell size. Gerupuk is where you will find some of Lombok’s mellower waves which is why the bay is a favourite destination of surf camps. The outside reef breaks are more powerful, steep and hollow when overhead. While the inside breaks are a much easier and slower moving wave. In the middle of the bay is Don Don, an A-frame which is fun and surfable even when big. Hiring a boat from the village for a surf trip in the vast bay is a unique surfing experience and lets you check out each surf spot as they are not visible from land. Gerupuk village itself is quite a special place built right next to the water. Well worth a wander around to catch glimpses of traditional village life in Lombok. When you are all surfed out there are semi secluded beaches and hills around the bay to explore.

Gerupuk one of the best surf spots in lombok

Located in the center of Gerupuk Bay in front of Batu Tiang, Don Don needs a sizable swell to show up. On smaller days you would not even know it's there. When it works, Don Don breaks breaks in front of the headland, both left and right into a safe channel. A very makeable take off into a long ride where you can practise your turns and cut-backs before dismounting in the channel. On bigger days, it can be more challenging as the slow rumbling Don Don throws a lot of water resulting in long hold downs. Not uncommon to see softboards and their human cargo being dragged around in the white water.

Breaking on the Eastern side in front of Pantai Terasak, Outside Left is more inconsistent and harder to score. Not frequented by surf schools, so it may be worth checking out. If you do get it, it can be a powerful left hander with a steep drop straight into a barrel. Make sure you escape before getting slammed on the sharp coral.

The best wave in Gerupuk breaks at the bay’s entrance under Gili Golong - the 2 hills that look like lady parts. Outside Right is a is a steep hollow right hander which is suitable for intermediates plus. This is not a wave which you can ride straight forward or you will end up on a very shallow sharp reef. Always a chance for barrels on overhead swells and lower tides.

Inside Right breaks in front of the Gili Perigi island and is a much mellower wave than the outside breaks. This is fun right hander starts with an easy take off and peels for a very long distance. Good for beginners in medium sized swells. When overhead and above it starts to wall up giving experienced surfers a chance to get barelled. Probably the most crowded wave in Gerupuk as it surfable by all levels.

When the swell is maxing out at the other breaks you can try kiddies point breaking off Batu Lawang. Kiddies is a right point break which needs significant swell entering the bay to start breaking. Starts to barrel when it gets to about head height. Don’t let the name fool you, it gets shallow and sharp towards the end.

Surf Camp Lombok is established in Gerupuk and part of the local community. Seek them out for surf lessons with experienced guides and instructors.

There are places that rent our surfboards of varying quality in the village. A better idea would be arrange one with the guys at Banyu Surfboards. Otherwise you can bring your own or hire one from Kuta.

Things to do in Gerupuk

There are a couple of local restaurants in the village where you can get fed and down a few bintangs after your surf. Cafe Ombak is an established restaurant with views from the 2nd floor. Snapper Surf Corner is local owned and serves grilled seafood, and fish and chips caught fresh daily by the owner. Gerupuk Surf Cafe backs out onto the beach for great views of the bay.

Not much nightlife in the village itself, but The Dome Lombok on the hill looks to be the first bar to appear in Gerupuk. The restaurant has a pool, bar with sun set happy hour sessions, pool and events with live DJs.

Surf Camp Lombok has a skate bowl on its grounds if you happen to have a deck handy.

With the amazing surroundings and hardly anyone around, the area is a photographer’s dream.

Take a short hike up to Gerupuk hill for the spectacular view and amazing sunsets across the bays. On the far side of Gerupuk, you can explore Tunak hill and take some snaps of Gili Penyu Tunak, the island at the Southernmost tip of Lombok There is a wealth of hidden and secluded white sand beaches around the bay which are incredibly beautiful.

One thing to watch out for in Gerupuk are beginners in the water. Gerupuk is a popular spot and there are no suitable beach breaks in the bay where learners can practice. Boat captains have no choice but to bring their passengers to the easiest break on the day. When there is a crowd you may find a minefield of learners on the inside of waves with little idea of what they are doing. If there is a surf school with guides pushing a line of clients onto waves, the odds are stacked against you getting a ride by yourself (without having to burn someone).

Watch out of for the hustlers that target surf trippers in the village. They will hassle you about getting boat transport from them and are quite aggressive.

October 10 22
Best Beginner Surf Spots in Lombok
The top beginner friendly waves in Lombok and how to surf them.