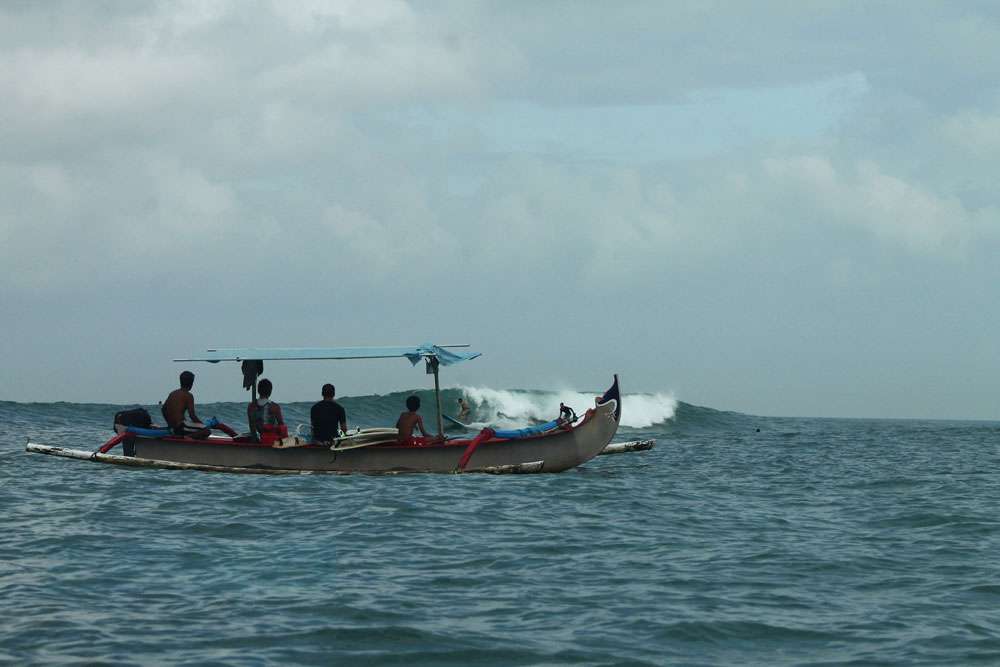 Jimbaran is a launch point for boats heading to the reefs with a few sheltered surf spots when the waves are big elsewhere.
Updated: Aug 2 2022

Jimbaran Bay is sheltered crescent shaped beach on the South side of Bali's Ngurah Rai airport. One of the first landmarks you see when your plane lands in Bali. For most of the year, the bay is a calm as a swimming pool and the beach gets hardly any surf. When the big Southern Ocean swells start marching in and closing out Kuta beach, there will be spots around the bay that offer refuge and beginner waves. Jimbaran is also a launch point for boats which you can hire to one of the many breaks around the airport reef.

Where to surf around Jimbaran Bay. From Jimbaran, you can hire a fishing boat to the various breaks situated around the airport reef. Ketut boat service is conveniently located next to a carpark. On the Southern side of the airport reef,

Airport Right is a favourite spot for natural footers. The right hander starts with a steep takeoff into a long walling ride before ending in a barrelling section. As it picks up less swell than the other reefs in the area, the spot needs a large swell hitting the coast before it really turns on. Fun on smaller days, but experts only when overhead.

Toro Toro is usually a beginner spot. But when it's big around the Bukit, Toro Toro can throw up some nice right handers. The left usually sizzles out. The inside is a preferred spot for beginner surf classes learning their pops ups. The spot is for notorious for sea urchins so bring your boots. Access by boat as it is a fair way out.

When the swell is massive elsewhere, a waves start breaking in front of the Four Seasons resort in the Southern Corner of Jimbaran. Mellow wave requiring a fair paddle out. Its quite a shallow reef so make sure to enter and exit the beach further North of the temple next to Sundara beach club.

At the Southern most end of the bay, Honeymoon point is sheltered from the biggest of swells and produces a nice long left hander in the right conditions. A beautiful cliff side spot frequented by dating youngsters. Accessible by scooter from the headland and a scary cliff jump to get to the lineup.

You will see local kids riding closeouts and playing around in the shore break.

Jimbaran has a similar setup to Kuta where entrepreneurs along the beach offer surf lessons and boards for hire. There are bigger schools like Rezha Surf who do private and group lessons and also organise surf trips to the breaks around the Bukit or Kuta.

Along the bay there are various stalls where you can rent boards by the hour. At the Northern end you can rent SUPs from PrioritySUP.

The nearest surf shops are along Jalan Uluwatu and Labuan Sait on the way to Uluawatu and Padang Padang.

Things to do in Jimbaran

Jimbaran Bay really comes alive during golden hour. One of the most popular places to get a view of the famous Bali sunset with tourists and locals alike strolling, taking snaps and just relaxing in the glow. Kick back and watch the activity at one of the many beach bars with their deck chairs and bean bags. Swanky Sundara beach club at the Southern end has happy hour cocktails, a private pool and sun beds.

One of the tourist must dos is a meal of local seafood grilled over coconut husks at a Jimbaran resto where you can dine on the sand. Lots of restaurants to choose from at Kedonganan Beach and another group at the Southern end catering to the guests from the Intercontinental and other hotels around that area.

Check out the variety of seafood at Bali's largest fish market, buy what looks good and get a stall to cook it for you. Get there during sunrise if you want to see the fishermen bring in their catch from their boats.

Stand up Paddling with PrioritySUP

You can rent out SUPs from PrioritySUP located at the Northern end of the bay where the water is calm. Good way to see the sunset from the water.

Where to Surf in Bali

Canggu
Surfing the International Hipster Destination
Pererenan
Pererenan is home to a series of river mouth and beach breaks where you may just be able to escape the crowds.
Kedungu
Kedungu, in the Tabanan district of Bali is a super chill spot known for beginner friendly waves in an idyllic rural location.
Kuta
Kuta on the Western side of Bali is known for its long stretches of black sand beach and awesome reef breaks.
Medewi
Medewi is a small laid back fishing village in the Jembrana region with Bali’s longest left hand point break.