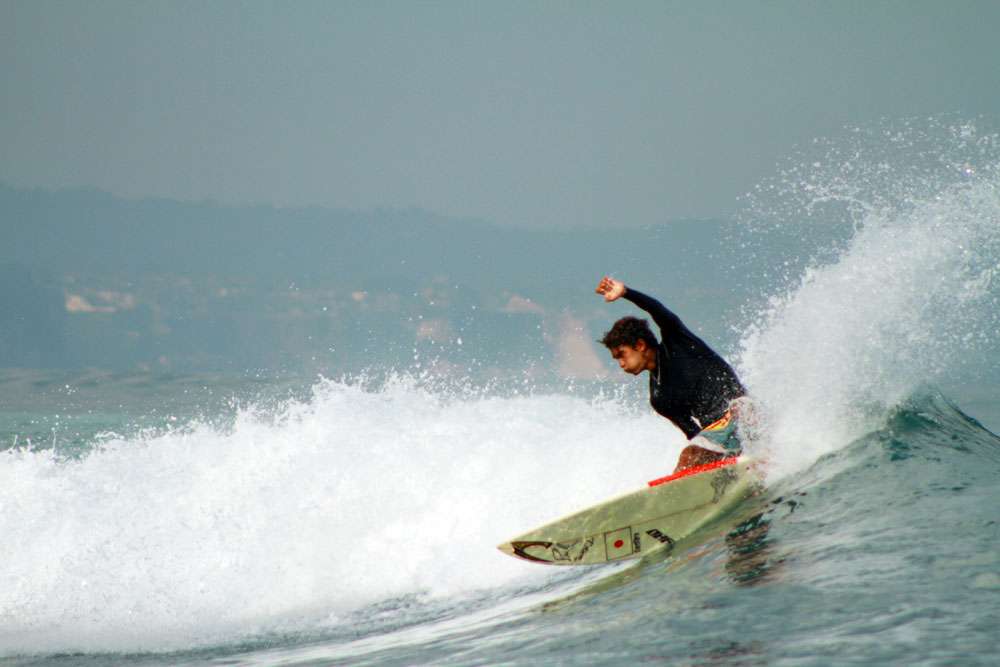 Kuta on the Western side of Bali is known for its long stretches of black sand beach and awesome reef breaks.
Updated: Oct 10 2022

On the Western side of Bali, the 5 km coastline from the airport in Tuban up to Seminyak in the North called Kuta is one of the most popular destinations for surf trippers. The original surf capital of Bali, Kuta's fame has been somewhat overshadowed by Canggu in recent years. Good news for surfers as it means less crowds at the awesome breaks in the area. Kuta has quality beach breaks and world class reef breaks just offshore. The beach breaks are a good place for beginner surfers when small, but gets powerful and hollow when the swell is big. The best time to surf here is during the Dry Season when there is consistent swell and offshore winds all day. Heading North from Kuta, the waves get progressively bigger and you can usually find a surfable break with less crowds.

There are surfable wave along the length of Kuta beach which work best on mid to high tides. The super compact sand results in more power than your average break at home. You might even get lucky with a barrel.

Halfway Kuta, at the bend in the beach and opposite Jalan Benesari is considered the best spot at Kuta beach. Both left and right breach breaks which get hollow on the lower tides and offshore winds. Also the most crowded. On a typical day there are local rippers, hot groms attacking the shore break, surf schools and a eager tourists who have decided to try surfing for the first time. Awesome beach break wave if you manage to get one by yourself.

About 800m out and opposite the Discovery mall is one of Bali's best waves. Kuta Reef is a pumping left that goes on for a very long distance with lots of chances for hits and barrels before ending in the channel. You can take off anywhere along its length so drop ins are not uncommon. Usually the smallest of the Kuta reef breaks and the most crowded. Hire a boat from Pantai Jerman if you would rather not paddle out.

Between Kuta Reef and Airport Left is Middles. Usually bigger than Kuta Reef and smaller than Airports, Requires a bit more paddling and duck diving than the other 2 breaks as there is no channel to take advantage of. Check out Middles if you would Kuta Reef is too crowded. You can hire a boat to get here.

Breaking off the reef on the North side of the airport runway, Airport Left usually gets the most swell of the 3 breaks. It's a long left hander, great for top to bottom surfing and hitting the lip before ending in the channel. Usually has 2 take off positions. Bigger sets break on the outside peak while smaller ones break on the inside. The best ride is when you can connect both peaks. Watch out for surf schools sitting on the outside peak waiting to push their students onto a wave. The dry season trade winds are cross shore for this break and tends to stuff up the afternoon session, so this break is best surfed in the morning.

Peelers To The Sand - Kuta Beach

Kuta is well serviced by surf schools with quite a few large operators. You can even find schools which offer instruction in languages other than English. Beach boys at the warungs are keen to offer lessons. But quality of instruction is not guaranteed.

Kuta beach is lined with warungs where you can hire boards by the hour. It's convenient, but the quality of the boards, leashes and wax jobs vary greatly. If you want to improve your surfing, a better option is to hire a board for a couple of days from a local surf shop. Surf schools will have foam boards for beginners.

Big international surf lifestyle brands like Quicksilver and Rip Curl are well represented with lots of surf shops in central Kuta, Legian and Seminyak town centres. You can also find Channel Islands, Deus Ex Machina and Chilli surfboards stores have also set up stores in the area. There are smaller local surf shops around Poppies lane like The Pit, RPM and Naruki.

There are a couple of surf outlet stores on the bypass highway seems to be the place for tourists to pick up discounted surf clothing.

There are showrooms in the Kuta area where you can order a board from respected local and international shapers who now call Bali home.

Things to do in Kuta

Kuta has changed a lot since the first Aussie surfers gazed up on the outer reefs. The Tuban / Kuta areas are now home to huge international hotels and the businesses which profit off the tourist trade. There are still home-stays and warungs around Poppies lane, but the days of scoring mushroom shakes are over due to Indonesia's clamp down on illicit substances. Central Kuta is the party center of Bali. Come night time, crowds gather at the LXXY and Velvet & Hypnotized, as well as at old stomping grounds like Apache Reggae bar and Bounty.

In Seminyak, Kuta's more fashionable neighbour, the choices are slightly more upmarket when it comes to dining and entertainment with beach clubs, lounges and restaurants catering to international tastes.

For more info check out our Kuta Beach Guide.

October 10 22
Bali Surf Trip Packing List
Complete guide to the essential and nice to have gear for a surf trip to Bali
August 25 22
Canggu Beach Guide
All you need to know about Canggu international hipster destination.
August 25 22
Kuta Beach Guide
The Ultimate Guide to Kuta Beach
August 25 22
Local Bali Surf Brands
A collection of surf brands which are coming up with local Bali made and inspired goods.
October 10 22
Best Beginner Surf Spots in Bali
Where to find the best beginner level waves in the island paradise of Bali.